At the very beginning we thank guru Padmashree Shashadhar Acharya for inviting us to this special platform Acharya Chhau Nrutya Bichitra to share our own stories on Seriakella Chhau dance.

My name is Luisa Spagna I am dancer and a dancetherapist with a postgraduated diploma in dancetherapy and member of Professional Association of Art Therapies ARTE italy. Actually I live and work in New Delhi.

Namaste. My name is Paolo Pacciolla. I am a musician and ethnomusicologist (PhD Durham University, UK) at the moment National Tagore Fellow affiliated at Indira Gandhi National Centre for Arts in New Delhi.

My journey into Indian Classical Dance forms started in 1995 when I came to India to learn Odissi in Bhubaneswar. That time I didn’t know very much about other dance forms of India, except for the few well known classical dance styles.

It was an extremely wondeful surprise to be at the Konark Festival that year – in 1995 – where Guru Kedarnath Sahu and Troupe performed Seraikella Chhau dance.

I remember I was watching the varoius performances when suddenly the atmosphere on the stage had a change, according to my feeling … of course.

Drums that I never heard before and a kind of mysterious, delicate, suspance appeared on the stage. There was a mix of loud sound of drum beats acompanied with also a loud recitation of rhythmic syllabs – Bols- and a deep silence between the drum beats.

These two moments were both present at the same time. Then, a dancer with a mask appeared on the stage with a balanced walk, soft movements, elegant gestures.

Softeness, strenght and intensse powerful gestures were performed at the same time.

I remember I was amazed.

In some way, maybe without being so conscoius in that moment, I expressed the desire to learn that dance form.

Some months later I was practicing Odissi at Gandharva Mahavidyalaya in New Delhi, having received the ICCR scholarship, and during a break, one girl (Raka Maitra) came to me asking from where I came from and what kind of dance I danced in Italy. Then, she introduced herself saying that in the afternoon she practiced Odissi but in morning time she was learning Seraikella Chhau dance at Triveni Kala Sangam with Shashadhar Acharya.

It was such a great news! The dance that took me really in another world for its beauty at Konark Festival, was so close to me and I could have a chance to learn it.

Next morning I went to Triveni Kala Sangam where I met guru Shahshadhar Acharya or ShashiBhai … as I call him.

In one month of daily training, with also the helpuful demonstration of a senior student, Bhumikeswar Singh – who is nowdays a well known artist, I learnt the first basic steps of Seraikella Chhau, Chalis (walks) some Uphlei (basic excercises) and the first item Devadasi.

At the end of this first intense training I received also a gift from Bhumikeswar Singh: the Devadasi mask.

Seraikella Chhau was known to be a male dance form but later, during I met other female dancers.

During many lessons there we were only a group of female dancers practising Chhau in the morning session.

During my staying in Italy between intensive periods of learining in India, I tryied not only to practise what I learnt from Shashadhar Achary but also to talk and write about this unique dance forms of India to spread this dance form.

I had the chance to write some articles, one of this is published in the online review AsiaTeatro, and to dedicate a section of the book La gioia e il potere. Musica e Danza in India that Paolo and I wrote some years ago.

During my theoretical research I knew that Seraikella Chhau had been performed in Italy for the first time by the royal family Singh Deo, in 1930.

Why and What pushed me to take the decision to learn Chhau was first the masks – Seraikella Chhau masks are masterpieces apart from dance. Before starting to come in India, Paolo and I were working on masks, orginal masks that Paolo created for our performance. For some years our contemporary performances were featured by original masks. Anyway, I was also very impressed about the lyrism of the gestures and how Seraikella Chhau dancers could walk, jump and turn with a so limited vision and how to breath properly in such a mask for the whole item without soffocating!

As we can see the back of the mask has just four very small holes!

As I have already said, I used masks much before to learn Chhau, but when I started performing Seraikella Chhau items with masks I started feeling the moment to wear the mask a very special, ritual moment. I felt I am really start the journey into the character that I was performing. Wearing the mask of Ratri or Devadasi and enter the stage is of a such intensity. You are really melting with the character.

The expressions of the face are never neutral under the mask, you live with the character, and when you remove the mask is again how you are coming back from anothe world.

Usually the face is dripping with sweat.

Another aspect to dance with a mask with such limited vision, only two small holes near the eyes, I learned how to orient myself into the space: turning and jumping always with the focus of the direction of the audience to not loose the orientation.

The masks gave result to the body to express the story, but also the swinging of the body, the small variations of the movements, the tension of the backbone, the way to turn the head and neck with a mask has a fondamental importance.

Apart from the masks, I found the lyrism and the stilisation of the movement of animals walks: the elephant, the peacock, batterfly, tiger, or the daily action of the women like how to crush the spices, carrying the water, posing like a crescent moon, just to mention some… turn into dance seemed a very contemporary body expression.

This particular aspect of the Chhau dance tecniques became for me very important later when I decided to create my own coreoghraphies and dance without the use of the mask. 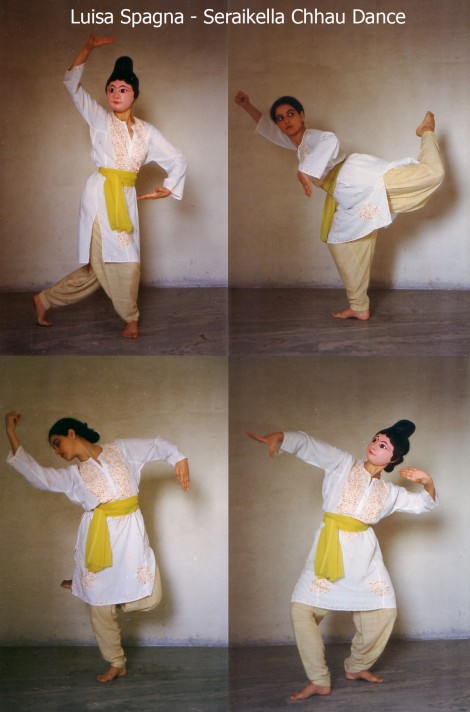 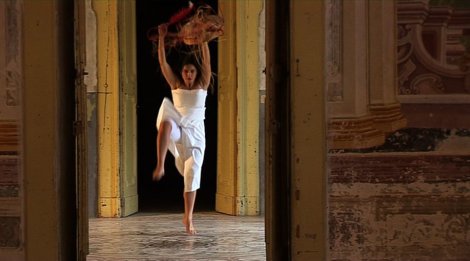